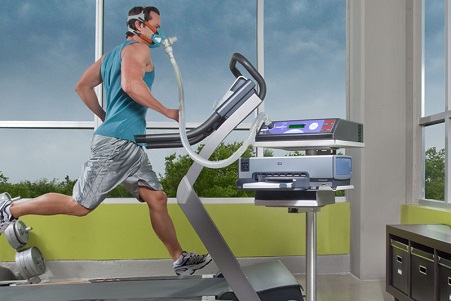 The maximum oxygen consumption (VO2 max) is defined in various ways according to each author, which may be the highest rate of oxygen consumption that can be achieved during maximal or exhaustive exercise performed at sea level (Wilmore and Costill, 2001 ).

To Weineck (1999), the maximum oxygen consumption is an indicator of the capacity of the body to produce muscle work through aerobic metabolism. The VO2 max has been considered one of the great importance of parameters such as performance indicator, the proper condition of human beings to achieve average of exercises and long term is dependent on the aerobic metabolism and this, in turn, is used to classify cardiorespiratory capacity, in athletes.

VO2max should be evaluated in all modalidas because even in sports like soccer, basketball, handball having anaerobic predominance, work on the aerobic system aims to increase cardiovascular endurance practitioners (Santi Maria, Arruda and Almeida, 2009) .