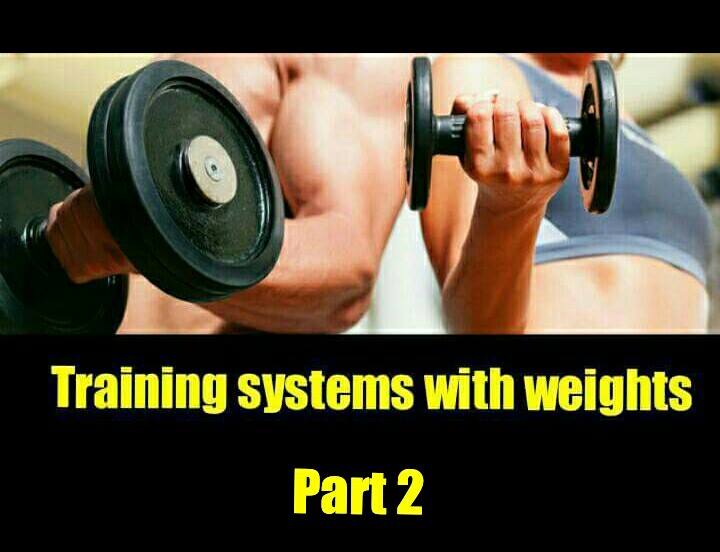 Today the publication brings the second part of the story about training with weights systems, where we mentioned the other systems, check below:

13.System Functional Isometric: Usually used in the final series to exhaustion. When the practitioner can no longer perform movements, argues in an angle that requires great effort. Typically used to gain strength and achieve complete exhaustion (FLECK and KRAEMER, 2006).

15.System Pyramid Descending: Follow the same principle of progression, however, is increased the number of repetitions and the load is decreased, example: 1st series: 6 reps with 60 kg, 2nd series: 8 reps with 55kg and 3rd series: 10 repetitions with 50kg.

16. Multiple of weights system (DROP-SET): If the sequence in the series execution including removing part of the overload, eg Run up 6 reps with 50kg, immediately after, reduces the burden on 45kg and will run again the 6 replicates, and so on. The intention of this system is to increase the local vascularization and achieving concentric failure.

17.Negative system: In weight training the concentric phase is called positive and negative eccentric. This system seeks to use the most eccentric, of great importance to muscle hypertrophy. The practitioner has the auxiliary aid for performing the concentric phase and performs eccentric alone, usually with the higher load that can withstand the positive phase (Fleck and Kraemer, 2006).

18.Priority System: Although traditionally begin training with the large muscle groups and then train the small, there are cases that the limitation of strength or hypertrophy can make the coach opt for this system, which uses the muscle group chosen as the first to be trained thus may require it to the fullest and without influence of prior fatigue (FLECK and KRAEMER, 2006).

19.Pause System: The practitioner performs a repeat with next load will 1RM, rest 10-15 seconds, and performs other. I usually have 4 or 5 replicates for such a system. The goal is to gain muscle strength.

20.Installment System: Perhaps the most traditionally seen currently. It came up the inability to train all muscle groups on the same day and achieve great results thus divided the training so they can be run on most timely number of exercises for two or three muscle groups and achieve better results and the possibility to train every day without losses (FLECK and KRAEMER, 2006).

21.Blitz Program: A variation of the installment system, but rather to train more than one muscle group per day, in which case trains only one group per day, using about 5 or 6 years for such a group (Fleck and KRAEMER, 2006).

22.Isolate Exercise System: Not only uses one muscle group during the training session, but a single exercise, for example: On a day of training the practitioner performs sets of 10 repetitions arm bending only, as may be possible within a pre set time. The system is not as well known and need a large monitoramente not be Overuser or Overtraining (FLECK and KRAEMER, 2006).

23. Super series system: Can be characterized in two ways, the first being the use of various exercises for the same muscle group with minimal or no gap therebetween. The second way is to use two exercises of antagonistic muscle groups with minimal or no gap between them, for example: a series of curl is performed and immediately after, performs a series of triceps rope (FLECK and KRAEMER, 2006).

24.Super slow system: As the nickname implies, the execution of very slowly on each rep and can take 10 to 20 seconds each. The intention is to lead to a long voltage and system advocates claim a greater gain in muscle strength, but without many conclusions. They usually have devices that isolate the muscles as the leg extension to this task (Fleck and Kraemer, 2006).

Knowledge of various systems allows us to diversify stimuli and thus be able to reach your goals. Science is slowly revealing in which systems are most effective for each goal and the training Science website aims to bring the information to the reader. Good studies.