What is microcycle, mesocycle and Macrocycle? 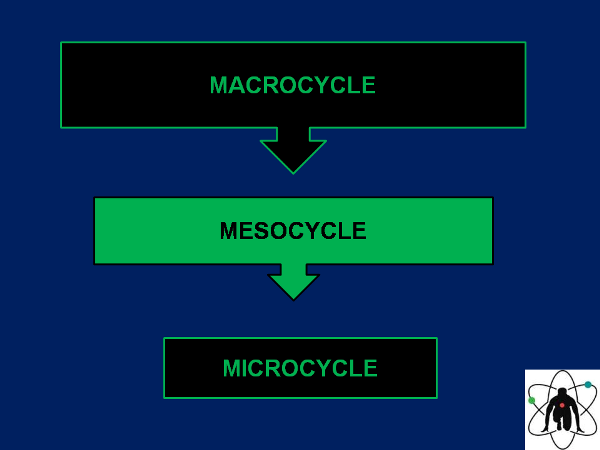 The periodization of a training program is critical to the success of an athlete and sports clubs. Such a strategy requires several steps, called microcycles, mesocycles and Macrocycles, where each has a role and own characteristics. Below we highlight the concept of each one:

The microcycles are the smallest units of periodization process. They are characterized by the training session and can be varied in period according to a total number of sessions, typically totaling from 1 to 4 weeks of training, varying with the ability to be imaged.

The short-term objectives are achieved microcycle will microcycle, such as improved in some simplest technique, positioning correction, among others. Adjustment of intensity and training volume is crucial at this stage to achieve the expected results without a hitch.

An example of a microcycle in sport can be the preparation of a football club during the week to prepare specific for the match at the weekend. The work is directed to that opponent to improve characteristics that make them have physical improvements, techniques and tactics that are important for success.

At that moment, the coach must interact with the student / athlete and expose objectives, methods used, discuss problems, priorities and development (BISQUOLO, 2010).

The mesocycle is a longest step in the training period and usually lasts from 2 to 6 weeks or microcycles (BISQUOLO, 2010).

The duration of mesocycles vary according to the competitive calendar period or proposed for achieving overall goal. In general, there mesocycles in several steps, usually introductory pre competitive and competitive recovery.

We can cite as an example to mesocycle pre season, where athletes come back from vacation and seek physical reconditioning order to be ready for the season (pre competitive), conditioning maintenance preparation, injury prevention and long-term tactical improvement during the season ( competitive) and the rescue work, where the athlete is already sold out of season and needs a job with lighter loads that does not allow stop completely, however, enables regeneration (recovery).

The general planning, targeting the larger goal of a long period of training is called Macrocycle. A macrocycle is composed of several mesocycles (at least four). A mesocycle microcycles is formed by several, usually two to six (Das, 1985).

The union between the results of micro and mesocycles lead to the result achieved in the macrocycle. It can be variable depending on the sport practiced.

Good planning of all stages of the training is a difference between preparing clubs and athletes, being crucial for the achievement of optimal results.