The power of exercise for elderly. 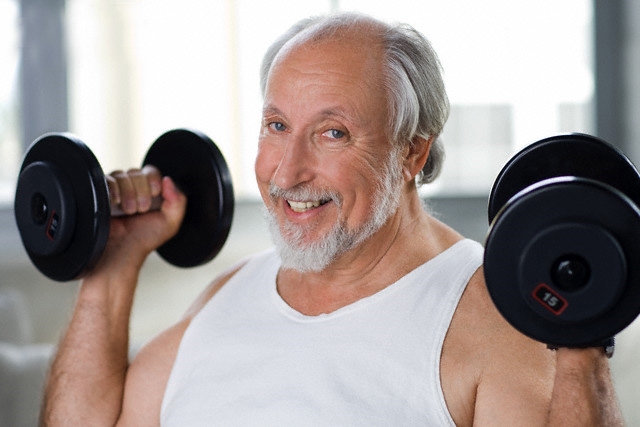 The reduction of muscle strength due to the advancing age brings functional limitations for the elderly, thus hindering their daily activities and the making dependent on those around them. Training programs with Weights are well accepted as a way to recover some of the lost strength with disuse and over time (Silva FARINATTI, 2007).

The maximum muscle strength is usually achieved between the second and third decade of life and shows a slight decline to 50, from there, the reductions become more pronounced with 12-15% per decade. These phenomena may be the result of reduced physical activity, denervation, hormonal changes, inadequate nutrition, and various diseases with increasing age (SILVA, FARINATTI, 2007).

In addition, lack of muscle strength in the elderly appears to be the main factor responsible for falls in the elderly (DIAS et al., 2006). According to the positions of the ACSM (2009) and several studies the systematic practice of weight training (WT) in the elderly, can promote increased strength, muscle mass, power and flexibility.

Proctor et al. (2000) found similar reductions in men and women, both in bone mineral component, as of total lean body mass, even in elderly practitioners of physical exercise aerobic predominance or with weights. However, when comparing the effect of WT carried out for 24 weeks at high intensity (70 to 90% 1-RM) vs. low-intensity (40 to 60% of 1-RM), it was observed that both types of training were sufficient to increase bone density of the femoral trochanter (reducing fracture risk in the femur) in men aged between 50 and 60 years. However, only the training performed at high intensity was sufficient to increase the bone density of the spine area (Dias et al., 2006).

The high intensity WT is a potent stimulus for the concentration of testosterone as acute response. Thus, enabling the lean mass gains even with advanced age. (CADORE et al., 2008)

Diabetics can benefit from weight training, six months of training has been shown to be sufficient to increase the action of insulin in older individuals (64-74 years) insulin resistant as a result of physical inactivity and obesity (FLECK & KRAEMER , 2006).

Some mechanisms may be responsible for increased testosterone induced by exercise, between those sympathetic activity increased in response to exercise and blood flow and vasodilation related to the release of nitric oxide by increasing the release of the hormone (SCHWALA & KLEINB, 2008; LENTI et al, 2011;. CADORE et al 2011)..

The energy savings that can be defined as the lowest muscle activation required to perform the same movement with the same load was observed in elderly subjects after a strength training period (CADORE et al. 2011).

Exercises that generate regular mechanical stress can be positive for the creation of small bone mass gains in these areas thus increasing bone formation by osteoblasts next (SCHWALA & KLEINB, 2008;. LENTI et al, 2011). Thus, it is suggested the practice of resistance training for seniors, subject to compliance its limitations and risks, for a better development of the benefits and safely.