Electrolytes: What are they? How important? 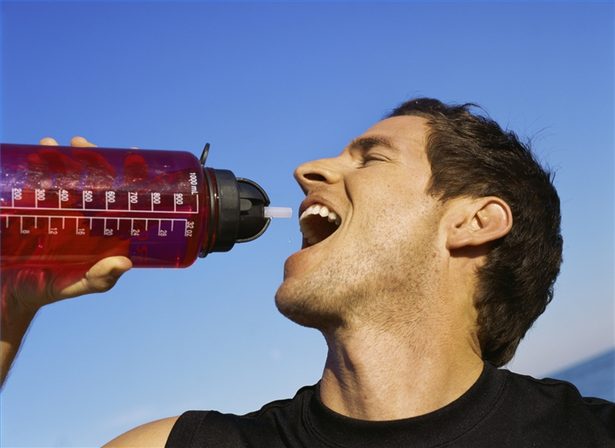 For many years we speak on the importance neglect in hydration during and after exercise, usually mentioned during prolonged exercise. This placement is usually followed by the mention of the need to replace electrolytes, but after all, what is it? Why is it important?

Electrolytes are inorganic substances known as minerals that are special for normal cellular functions.

SODIUM: Is the major electrolyte in the LEC (extracellular fluid).

It has function to act in the maintenance of circulating volume and is essential for glucose uptake and transport of various substances from the gut. is not produced by the body, being acquired through food and due to cultural patterns, their intake is varied, generally can be isolated or associated with spices to suit the tastes of food (Oliveira & Marchini, 2000).

Despite the perspiration level increase sodium loss, no need to supplement it: a healthy average would be ingesting 500-2400 mg / day, approximately ¼ teaspoon salt. When the stress is prolonged (+ 04 hours) or intense efforts, it is suggested every 15 minutes to consume an amount of about 150 mL isotonic beverage containing 0.5 to 0.7 g sodium / l to reset the needs organic (Kleiner & Robinson, 2002);

POTASSIUM: Is the major electrolyte in the LIC (intracellular fluid). Is responsible for generating various organic reactions: O2 transport, facilitating the conversion of glucose into glycogen in the liver, aid in muscle contraction, regulation of blood pressure and fluid balance, among others (Kleiner & Robinson, 2002 and Oliveira & Marchini, 8:00 pm). It is also not produced in the body and must be acquired through potassium-rich foods (especially fruits, generally abolished by bodybuilders due to the high glycemic index as Bompa (2000) Approximately 1,600. – 2,000 mg / day is recommended ( Kleiner & Robinson, 2002);

Chloride: Is metabolically controlled as sodium and their regulation depends primarily on the kidney function. It is predominant in the extracellular compartment, but can diffuse rapidly between the intracellular and extracellular compartments, contributing to the regulation of body osmotic pressure (pressure exerted on the water, forcing it to cross the cellular membrane), the transport of gases and regulation acid-base. Sodium chloride (salt) is the only source of blood chloride as blood sodium is obtained by chloride or sodium bicarbonate, explaining why the lowest concentration of sodium chloride relative to the sodium (Oliveira & Marchini, 2000 ).

Much has been said that poor hydration practitioners of physical exercise is associated with a decreased performance and also an increased risk of physiological disorders (Gonzalez-Alonso et al., 1997; Hargreaves & Febbraio 1998; Sawka, 1992; Sawka et al., 1998, cited Bergeron, 2001). But with excessive sweating due to sports, regular intake of water is not enough, especially in rehydration after it, because, as mentioned, sweating and sports practice in hot environments provide a very large loss of sodium and individuals are susceptible to muscle cramps and other unwanted reactions (BERGERON, 2001).

Intense sweating resulting from sports requires an efficient hydration, due to loss of electrolytes and water by sweating. If we fail to replenish these substances, it will be installed a water and sodium deficiency frame, bringing with it a irritability in some nerve endings, resulting in spontaneous contractions: cramps (Jansen et al, 1990 and Layzer, 1994 cited Bergeron, 2001) . On the other hand, when a decrease in the sodium content, so the player has the opportunity to rehydrate and replace electrolytes, the concentration of sodium quickly back to normal. People with excessive sweating lose large amounts of sodium and chloride, and generally have relatively low dietary intake or inadequate thereof (Bergeron, 1996 and Kleiner, 1993 cited Bergeron, 2001). The deficiency of other minerals such as calcium, magnesium and potassium also contribute to the onset of cramps and other neuromotor problems (Benda, 1989; Eaton, 1989; Levin., 1993; Liu et al, 1983; Miles & Clarkson, 1994; The ‘toole et al, 1993-95; Stamford, 1993 cited Bergeron, 2001), as well as a lack of minimum physical fitness and fatigue due to sports (Bentley, 1996; Schwellnus et al., 1997; Williamson et al. , 1993 cited Bergeron, 2001).

When an excessive sweating for several hours and is not reset enough sodium form or happens to intake fluid not containing it, such as water, can be installed one hyponatremia above, which is characterized by weakness, lassitude, apathy , headache, orthostatic hypotension, tachycardia and shock. Until the skin is affected: there is a decrease of elasticity thereof, and depending on the amount lost sodium may create confusion, hallucinations and coma (Oliveira & Marchini, 2000 and Mulloy & Caruana, 1995 and Vaamonde, 1982 cited Bergeron, 2001). The causes for the emergence of hyponatremia are: amount of sweat produced and sodium losses, water intake or other sodium-free drink before, during and after exercise and sex of the individual: women have a higher incidence than men possibly because of a lower body mass, they are susceptible to increased water retention in the body and maintain body weight for longer periods during the practice of prolonged exercise (Noakes, 1992;. Speedy et al, 1999 cited Bergeron , 2001).

How to avoid these types of problems? The simple addition of salt in the diet helps prevent sodium deficiency and maintain or restore hydration status. In the case of athletes with stricter a meal, an intake of 02-03 times per day for a given volume of beverage containing known amounts of salt, such as sports drinks, along with other foods or drinks during the training seems to be effective. This strategy compared with a program that only encourages water intake ensures greater additional fluid intake and a better retention of water due to the presence of salt. For those athletes who are more susceptible to cramps, an additional intake of salt is recommended: ½ teaspoon in 100 ml of sports drink (Bergeron, 2001). Even so, an appointment is recommended to the Professional Physical Education and Nutritionist to adopt the best strategy, respecting the intensity of training and individual dependence of electrolytes involved and the non-use of ergogenic resources that contribute to the loss of electrolytes such as diuretics.

Thanks to site Saúde em Movimento.