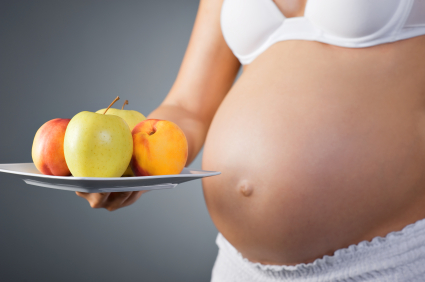 Upon discovering the pregnancy, the woman is faced with several questions regarding the practice of physical exercise, nutrition and care in general. In article of today we seek clarify doubts regarding the nutritional status of pregnant women, especially physically active. For this will be reproduced the article was sent by the teacher Mayara Guissoni.

During pregnancy the anabolic state remains dynamic depending on the nutritional demands, promoting continuous adjustments in relation to various nutrients. The weight gain that early in the pregnancy is reduced compared to the final stage, needs to be constantly monitored to prevent the occurrence of deficiency or excess (Capriles; SILVA, s / d). Excess weight gain can expose the pregnant woman to the development of various diseases such as hypertension, diabetes, postpartum obesity, fetal macrosomia, and complications in childbirth and postpartum. Poor intake of energy and nutrients along with intense maternal physical activity may affect fetal growth and development (BATISTA et al., 2003), for example, the birth weights of children born to women in developing countries during the months of work heavy in agriculture are lower than those of children born at other times of year (HOWLEY; FRANKS, 2000), so efforts to achieve good maternal nutritional status before conception and during pregnancy are critical (SILVA; Capriles, s / d). The energetic cost of pregnancy is estimated at approximately 80,000 Kcal or 300 Kcal / day. This is necessary to cover the synthesis of breast tissue as uterus, breast, fat, and to compensate for the increased metabolism due to increased activity of the cardiovascular, respiratory and urinary the addition of fetal metabolism (Ghorayeb; Barros, 2004). It is common for pregnant women reduce their physical activity, not only because of the demands imposed by the growing fetus, mechanical instability and loosening of the joints but also the feeling of lassitude and drowsiness caused by the increase in hormones, especially progesterone (ARTAL et al. 1999). Pregnancy is described as diabetogenic state, during which they are observed various degrees of carbohydrate intolerance. The energy deposits mobilized are predominantly from fat. As that increases the level of exercise, there is a greater contribution from carbohydrates ( ARTAL , 1999) , which can be beneficial for diabetic pregnant women , but not to those that have tendencies to hypoglycemia. Maternal hypoglycemia may be associated with strenuous exercise during the last trimester of pregnancy. The reduction in blood glucose can result from greater glucose uptake by the fetus and the mother, the smaller maternal liver glycogen reserves or reduced maternal hepatic glycogenolysis (Maganha et al., 2003). Should reduce the chance of occurrence of hypoglycemia with a higher intake of carbohydrates (eg 30-50 g) with food and / or beverage suitable for sport before exercise (Armstrong, 2007). Based on current knowledge, the energy seems to be the main nutritional concern for physically active pregnant. If energy needs are met, it seems likely that other nutritional needs are met, since a wide variety of food is consumed. Breast appetite may be the best indicator of total energy needs, and all women should be advised to eat according to their appetite. This advice, however, does not mean that food intake should not be controlled. The rate of maternal weight gain is the best clinical measure of adequacy of maternal energy intake. The weight gain of a physically active pregnant woman should be monitored monthly throughout pregnancy. If the rate of gain deviate from the intervals around the normal curve at any time, the daily energy intake be estimated using a 24 hour around ingested food report and intake should be adjusted properly (BUTTERFIELD; King, 1999) . Stay tuned for upcoming publications. We will bring more information on pregnant women.