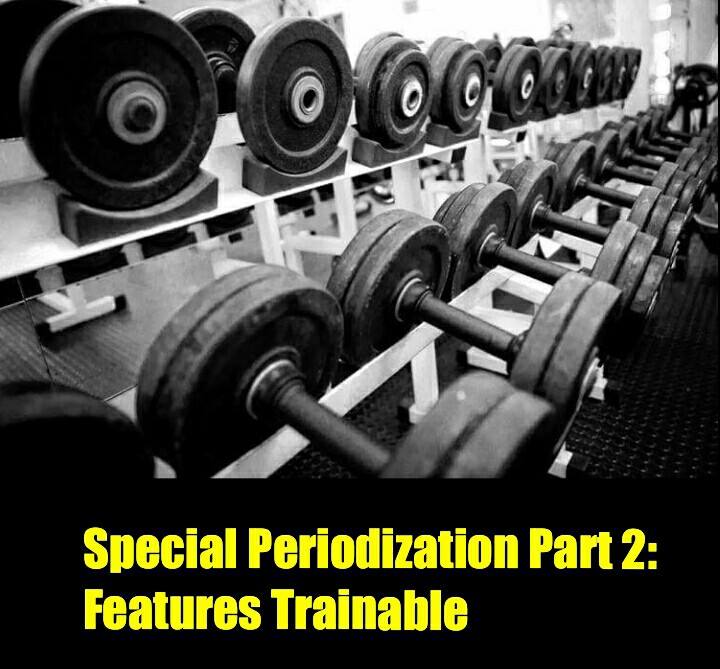 After talking on the Principle of progression in the first part of our special periodization, today we discuss the trainable features in a training program.

The force production capacity is required for all movements. Some factors may interfere with the muscle action and expression of force, for example, the angle penação, the joint angle and speed of contraction (GULCH, 1994). Another influential factor in force production is the activation of the motor units, these are recruited according to their recruitment threshold, which usually begins with the recruitment of the slowest units for the fastest, the principle of known size (Hanneman et al. , 1965).

The adaptations to training with weights allow increased force due to neuromuscular factors. There is a force sharp increase in the first weeks of training (COBURN et al., 2006). The amplitude of the power gain depends on the variables of training as intensity, volume, type of software used, selections of exercises and order, frequency and rest period (KRAEMER and Ratamess, 2004).

Most of the training programs with weights use of dynamic repeats its sessions, divided into concentric and eccentric movements, and isometric contractions are usually in the background. Among the types of muscle contraction, eccentric contraction is the stage with greater force production capacity (KOMI et al., 1987). Moreover, the eccentric phase is less metabolic demand (TRAM-Peterson et al., 1972) and corresponds to the further promotion of hypertrophy (HATTER et al., 1991)

It is interesting that all types of muscle contraction are included in a training program, therefore, they are able to produce all the capabilities and benefits related to training (Farthing and CHILIBECK, 2003).

Changing the overload is a common variable in training, be it in sports or academies rooms. In general, such a variable may be changed using three methods:

Increasing burden based on 1RM

Increasing load based on a number of repetitions

Increasing load repetitions based on a target area (eg 8 to 12).

The significance of the overload level varies with the level of training. In beginners individuals, loads between 45-50% is enough to gain muscle strength (Campos et al., 2002). Already in advanced individuals, loads above 80% appear to be ideal (Hakkinen, ALEN and KOMI, 1985). Although the strength gain occur with moderate loads, high overhead is more efficient in this respect (Campos et al., 2002).

Even with its higher efficiency in power gain, is not it interesting to use a heavy burden on individuals beginners, for this population suggests the use of moderate loads with injury prevention order and correct implementation of the proposed movements (KRAEMER and RATAMESS, 2004).

The volume of training is characterized by the amount of reps plus the maid overhead. It is also a parameter to identify how the trained muscle group is under stress (TRAN, DOCHERT and BEHM, 2006).

This variable has shown to influence neural factors (Hakkinen et al., 1988), hypertrophic (TESCH et al., 1987), metabolic (Ratamess et al., 2007) and hormonal (Ratamess et al., 2005). The volume can be changed by increasing or reducing the number of repetitions, series, overload. A question much discussed in studies is the comparison between multiple series and simple series, where multiple series are more efficient in a comparative, both trained individuals (RHEA et al., 2002), and for untrained (RHEA et al. 2003).

Select what type of exercises will be used in the training session is something that deserves care and planning, therefore, it is another variable that can affect results. There are two types of exercises, namely single joint or multi-joint. Multiarticulars squat exercises like bench press and are more effective for an overall power gain, therefore, are able to carry a larger load (Stone et al., 1998).

The single joint exercises like knee extension are simpler and train in isolation a group or even a single muscle. They are commonly used for beginners to have a simpler implementation (Mc Curdy et al., 2005).

Thus, it is interesting to use both types of exercises, according to the level of training and goal.

The exercises on machines has been classified as easier to implement, more secure and allow the overall performance of the exercises that would be difficult to be performed with free weights such as knee extension (Mc Caw and Friday, 1994). Already free weights due to higher instability and greater difficulty, increase neural activations, both have similar effect with respect to muscle strength gain (ACSM, 2009).

The use of free weights or machines should occur according to the practitioner’s training level and the objectives outlined.

The ACSM (2009) suggests the use of machines with add-on weights for beginners and in the case of advanced practitioners, advocating the use of exercises with free weights and complementary exercises on machines.

The following exercises can greatly affect the expression of muscular strength (Sforzo and Touey, 1996). Perform antagonists exercises in sequence is capable of producing greater muscle strength (BAKER and NEWTON, 2005) to perform two exercises of the same muscle group or synergists (MAYNARD and Ebben, 2003)

Studies reveal that the use of multi-joint exercises at the end of the training session sharply decline your strength levels (SIMON et al., 2005, 2007), therefore it is suggested that such exercises are carried out at the beginning of training (SPREUWENBERG et al, 2006).

The ACSM (2009) suggests that the range for full recovery exercises like Squats can take 2-3 minutes as complementary exercises require 1-2 minutes.

Perform movements at high speeds enables a larger volume of loading compared employed to run slow movements. However, it seems that the use of moderate and low speed movements are able to stimulate greater gains (Mc Evoy and NEWTON, 1998).

There are two types of slow-running movement, the first one is responsible intense overhead, thus requiring a slow running due to difficulty in performing the movement (MOKERJEE and Ratamess, 1999), while the second is when the individual intends performing a slow, even allowing for the overhead running at high speed.

Sakamoto and Sinclair (2006) point out that the number of repetitions in a series reduces as the speed of execution.

The ACSM (2009) suggests that voluntary slow speeds are used for beginners and moderate, while slow speeds involuntary be used for advanced individuals.

Training often ideal weights (the number of workouts per week) depends on several factors, such as volume, intensity, exercise selection, level of fitness, resilience, and the number of muscle groups trained per workout session (ACSM , 2009).