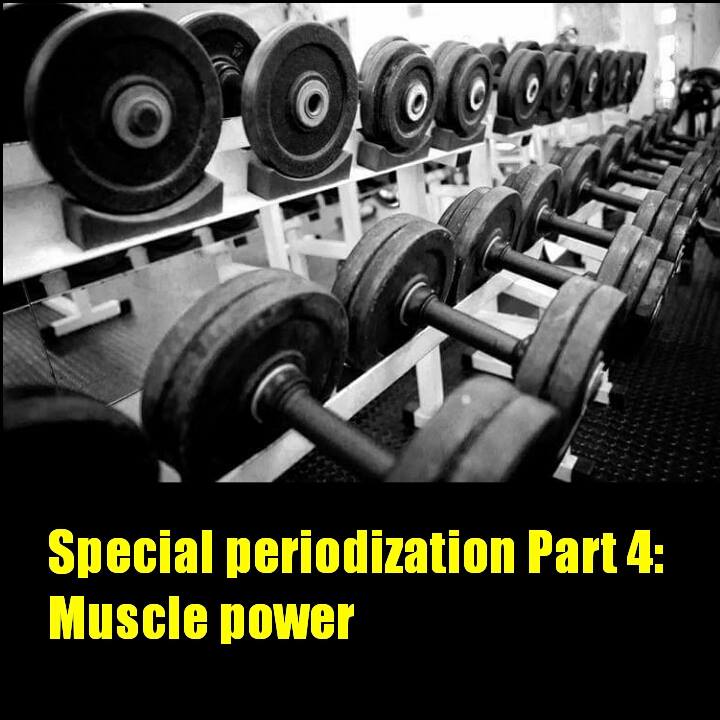 In the fourth part of the Special Periodisation the subject matter are the recommendations on the increase of muscle power. Such physical fitness has enormous importance in sports, which may cause improvements in performance. Muscle power is the dot product of the power generation rate is determined by the highest power output during a move. Neuromuscular contributions are important in relation to muscle power and include:

As we have mentioned in previous publications, weight training is of great importance for the development of muscle strength, taking into account the importance of physical fitness to improve muscle power, some studies report positive results with the use of weight training for increase in muscle power (Glowacki et al., 2004; KRAEMER et al., 2004). However, Hakkinen et al. (1985), notes that exercise with lower load and higher speed as vertical jumps, are most effective for this purpose, taking into account that usually the TP use of larger loads, moderate or low speed. Bobbert and Van Soest (1994), raise the possibility of exclusive use of training traditionally weights can damage power. An interesting alternative is to use series at high speeds to avoid the deleterious effect and assist in gain (Hoffman et al., 2005).

Overload, volume and speed of execution

The muscle power level takes place according to a number of variables, which were overload, volume and speed of execution. Overloading used in ballistic exercises have been out around 50% for upper limbs and up to 60% of 1RM in the lower limbs (Kawamori and HAFF., 2004; Cormie et al 2007), however, these values can be variable according the need of the sport (Kawamori and HAFF, 2004). High speeds are more interesting to the increase in muscular power, considering that use a large concentration of energy in a short period of time, being capable of moving greater amount of weight, or by providing larger displacement in the case of a jump (BEHM and SALE, 1993). The ACSM (2009) recommends that specific exercises used in conjunction with the training with weights to optimize the related results will power.

According to ACSM (2009), the rest period used in power training should follow strength training recommendations to improve the recovery. Suggestions: 2-3 minutes for specific exercises and auxiliary exercises 1-2 minutes.

The power training should be integrated into a strength training taking into account the relationship between the two variables (Newton et al., 2002). It is recommended the frequency of 2-3 sessions a week for beginners, 3-4 sessions for intermediate, and advanced level aimed at performance, 4-5 sessions per week (ACSM, 2009).